Day 4 begins rather early… we begin at 6am.  We are doing our final show checks – making sure all the labs have spun up properly and the platform itself is looking healthy.  The registration desk is open at 7am – attendees can come and sign up for Guided vLabs.  There’s a nervous energy in the NOC… anticipation of opening, hopeful that all will go well.  Calm before the storm so to speak.

With customers showing up in a few short hours, all eyes are on the vLab system.  We have our monitoring in place and visible in the NOC.  @eoinok77 did a great job configuring our eye of Sauron.  Second year in a row it has been watching over us… will become a bit of a tradition. 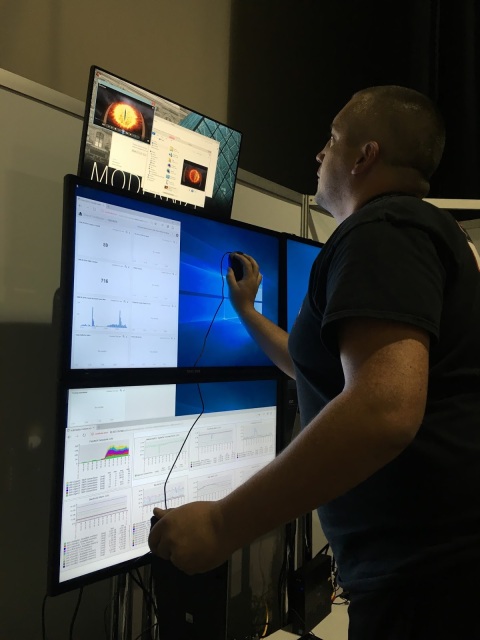 It’s early and some of us didn’t stop for breakfast on the way.  Dmitri grabbed a breakfast of champions from our snap table.  A Starbucks drink and Oreos will get your day going! 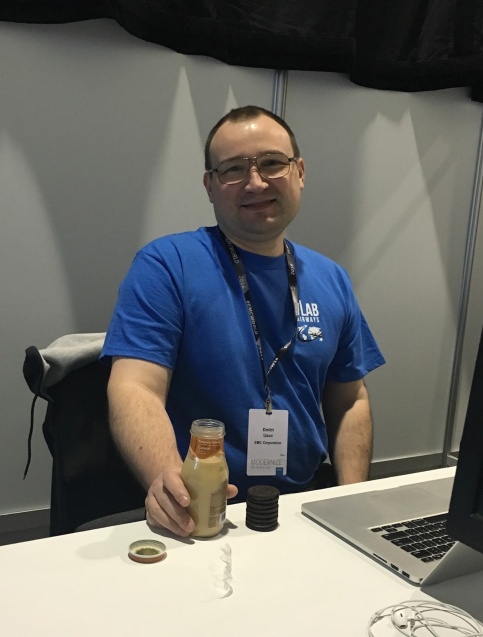 As customers begin to finally file in, activity in the back increases.  Slightly before open, we ran into an issue with PSOD on a couple hosts.  The labs running on those hosts died but we were able to clean up the backend with minimal impact to the customers on the floor.  Issues like this will crop up from time to time (chaos monkey happens).  Our goal is to minimize the impact when they do.  Constant communication is critical so the NOC and the front of house can stay in sync.

Its about an hour after open and we’re already over half full.

You can see in the front of the lab, the big screen is displaying the number of labs that have been taken, number of VMs created and destroyed, lab popularity, and other stats.  It will climb during the week… hopefully setting some records along the way.

The day has been running fairly smoothly and the lab has been pretty full since we’ve been open.  The main room of vLab has 130 stations and is open for any lab.  We have also run a handful of Guided vLabs – each with about 20 students, all taking the same lab.  vLab got a shout out in the Service360 (press release) keynote when the speaker mentioned that customers should head to vLab and take a session on MyService360.  Great publicity for us!  A lot of the content in the vLab Experience is aligned with product launches.  In addition to Service360, for example, we also have a couple labs on Unity (press release), the new offering from EMC’s midrange.  As of now, a Unity lab is the most popular in vLab – almost 100 sessions of “Unity – Simplified Storage Management and Administration” have been taken by customers.  On the whole, the day has been very good so far – we have delivered close to 900 labs consisting of nearly 5000 VMs.  And we have 3+ hours left!

We also got some good publicity on @emctv as they came and interviewed @vlabkreis.  She talked all about the vLab Experience and the opportunity it provides for the attendees of EMC World.  Education on the entire catalog of EMC’s products is readily available!

Another member of our team, @vfspb was watching live on the broadcast stream! 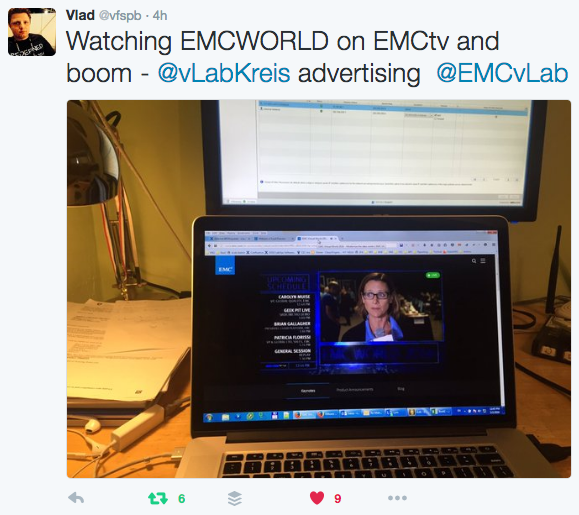