Day 2 begins with a run to the local Walmart for provisions.  An army runs on its stomach and so does the vLab team.  In this case the fuel is lots of soda, water, and chips of all kinds.  We all piled into room 407 at the Sands Expo to begin our final prep.  Conversations around the content and guides will run most of the day.  Meanwhile the platform is being prepped for the massive VM churn that the show brings.  Sessions will be drained and refilled to test the ability of vLab’s orchestration to deal with students taking labs throughout the day.  The labs within vLab are pre-popped so that students don’t have to wait more than a few seconds to get a lab.  We avoid waiting for provisioning by having the labs ready well before the customer steps foot into vLab.

The weather has been strange since we got here.  It has rained more in Las Vegas in the last two days than I’ve seen in all my prior trips combined.  They don’t do a great job of street drainage which isn’t surprising in the middle of the desert… 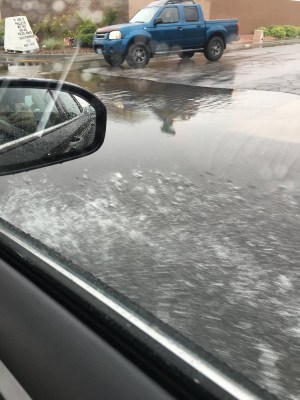 Luckily we survived and once we returned, we dragged the snack and a whole bunch of network switches, cables, and power strips to room 407.  As food is a priority, the table of snacks is set up first!

Fuel!  Introduced the Irish to spicy pork rinds… they were surprisingly open to the idea!

The show floor is starting to come together… first photo was Friday night (courtesy of @quinnwill) and the second was Saturday morning.  Power and network have been run and the drapes are starting to come down.  Carpet will come in along with the plexiglass dividers that form the walls of the vLab space.  It’s unreal the change in this space over time and the logistics companies do this almost every weekend as one trade show flips to another.  Amazing stuff. 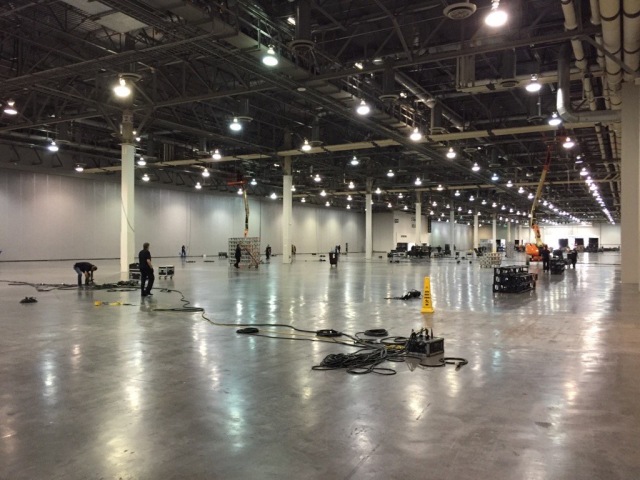 Unfortunately there is a grand total of one power outlet and network port in the entirety of room 407.  Tables are moved and clustered around them.  Power strips are chained together and spidered throughout.  Wired and wireless (affectionate SSID: GoatRodeo) networks appear and we’re good to go.  This will be our home for the next couple days until we move onto the show floor.  I like what we’ve done with the place!

The lab is starting to come together.  The carpet is completely down and the walls are beginning to be assembled.  Tables have arrive and are being set up in the main room.  Monitors have arrived and so has vLab’s reception desk.  Long way to go but good progress has been made!

Walls being assembled on the ground 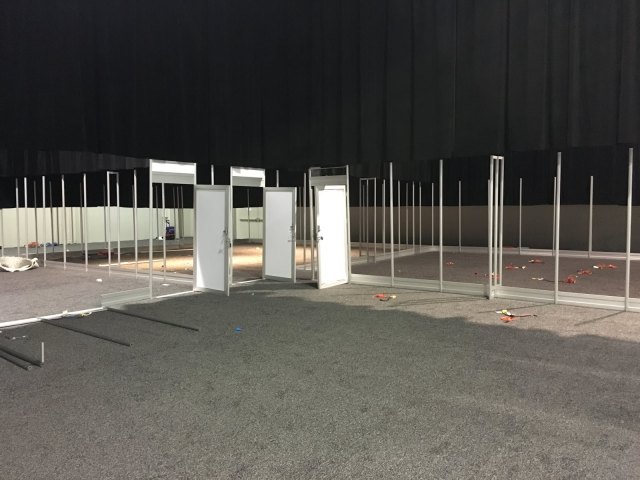 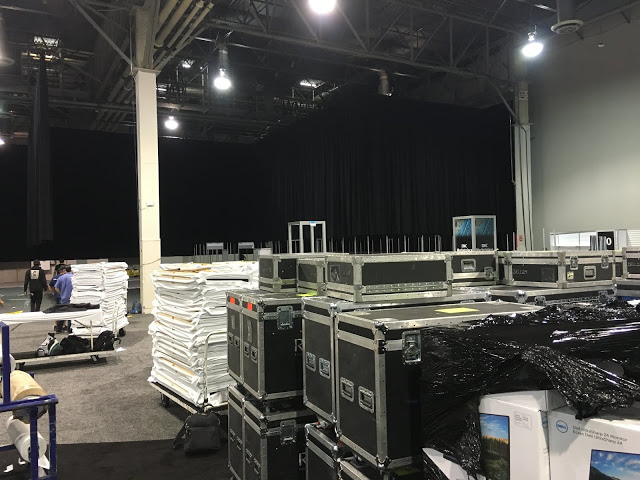 Massive amounts of materials show up on pallets and in crates.  There are about 20 people milling about vLab’s space building various portions.  The crates on the right contain all the monitors for the lab – ~200 plus spares.  We got some shiny new ones this year… you can probably guess why!

A ton of activity took place in the vLab space on the show floor.  All user stations were deployed – monitors, keyboards, thin clients and everything else.  Deploying 200 such stations isn’t nearly as fun as you think it would be.  Our shiny new monitors and thin client came with about 5 cable combinations from the rental company.  We should have had multiple options to actually get them to work but unfortunately, none of them did.  After many phone conversations, we got line of sight on a solution.  Something as simple as a cable with mini displayport on one end and displayport on the other caused a lot of stress!  Thankfully they would arrive in the morning. 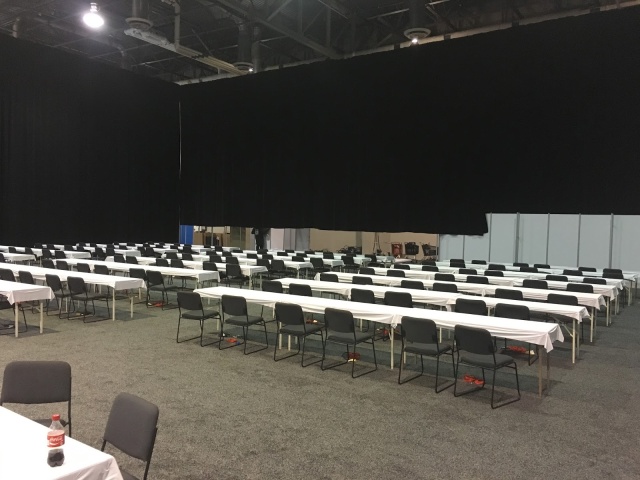 Waiting for stations.  And a Coke. 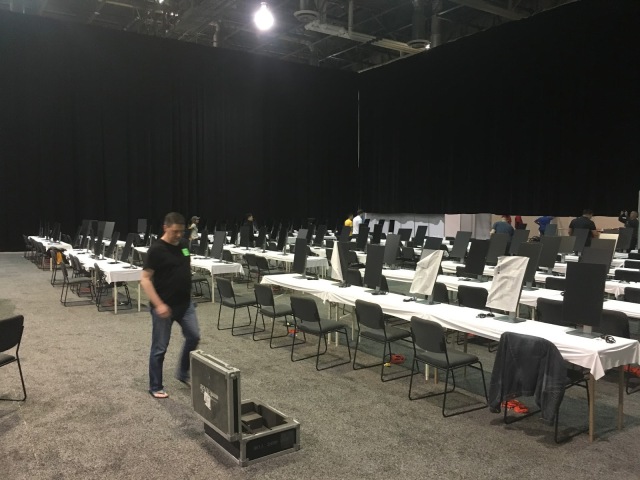 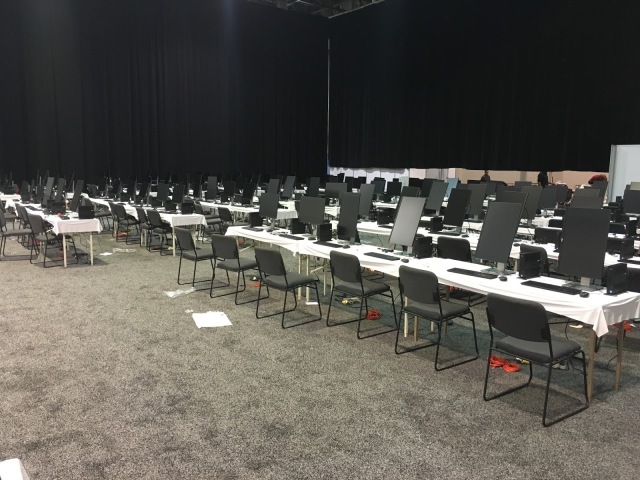 Each thin client had a numbered sticker on it… with a corresponding numbered box.  We’ve been asked to get them all back in the correctly numbered box… should be a blast!

It was a long day but we are ahead of where we normally are.  FitBit let me know that it was quite and active day.  Tiring but good thing for sure!

Executing vLab at EMC World has become somewhat of a spring ritual for those of us involved in it every year.  Months of prep culminate in a pilgrimage to Las Vegas.  The journey starts with three days of intense testing, setup, testing, and more testing.  Then the doors open and hundreds of customers flow through over the 4 days of the show.  Each customer selects a lab demonstrating an EMC product – this lab is in reality a live virtual environment designed specifically for EMC World.  They take the lab and when complete (hopefully) walk out a little more informed than when they walked in.  If all goes well, the customers won’t even know most of us are there.  We live in the back of the room behind blocked out plexiglass – a hive of activity designed to keep everything running smoothly out front.  Helping to run vLab at EMCWorld is one of the most stressful weeks of the year.  It’s also one of the best demonstrations of teamwork I’ve been part of.  A small team comes together and works toward success.  No bullshit.  Just get the job done.  And we do.

This beginning of this year’s show will be remembered for terrible travel experiences.  Missed connections, plane re-routes, and hours sitting on the tarmac marred most of our trips to Las Vegas.  I was one of the lucky ones, arriving on time without any issues.  Some landed at different airports to refuel, others were forced to LA and took a bus to Las Vegas.  Connections were missed, sleep was lost.  Most of us were at the Palazzo / Venetian by late Thursday or early Friday and were able to meet for breakfast before getting down to work.  It is an awesome thing to see friends and colleagues that you work with year round, always from a distance.  EMC World brings us together – literally and figuratively – to face the challenge of delivering vLab to EMC’s customers.

After breakfast we headed off to a conference room at an area data center to meet and begin testing.  We go over various operational plans, test plans, communication, failover / failback contingencies.  We QA the lab content, making sure the students will have a clean experience.  We test, test, and test again.

Tomorrow we will be in a conference room at the Sands Expo.  Building the show floor will commence overnight – luckily others take care of that but we still make sure walls, tables, network, and power are put in the right places for the lab layout.  vLab at EMC World is starting to come together!