One of the complaints that I hear over and over again from my team is that they spend far to much time in meetings.  They spend too much time talking about work so they have little time to actually do it.  It is usually coupled with the gripe that the meetings themselves don’t accomplish what they’re supposed to or don’t have a stated goal to begin with.  While I don’t always buy the venting as complete fact, I know that there is a lot of room for improvement in the meetings that I myself run.  But this post won’t be about how to run a meeting… there’s plenty of info on that topic here, here, and here. 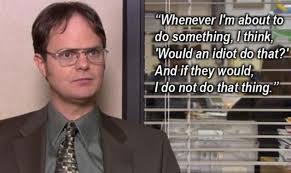 As a leader, it is important that when a decision needs to be made, you make it.  Waffling, entering into analysis paralysis, or simply delaying because you’re unsure can quickly lead a team into the ground.  Timelines become extended, people have more idle cycles, and tend to lose focus.  Setting direction is a responsibility we all have as leaders.  Take the right inputs, analyze them, and decide as quickly as possible.  The cost of not acting in a timely fashion generally outweighs the greater degree of quality gained by further deliberation.  This is certainly an art more than a science but in general action should be favored over debate.  See this post on decision making in teams for some more info on the topic and how it applies in the technology space.

There is a fine line between acting too quickly and taking too long to act.  It is a skill that we must develop as leaders because straying too far to one side is detrimental to our teams.  Acting to quickly leads to a higher percentage of incorrect actions and more time spent cleaning up the mess you’ve created.  On the other hand, not acting quickly enough has opportunity cost and generally ends up accomplishing less in the long run, even if you’re correct more often.  But I guess it’s fairly obvious that one extreme or the other isn’t the way to run things.  Somewhere in the middle is likely the best course.  My belief is that on the continuum from brash action on the left to over-extended deliberation on the right, a little left of center is where I’d be.  Consider all the facts you can with a bias toward action.

I favor action over discussion in most cases because you can adjust course later on but you can’t go back in time to make a decision earlier.  No matter how much discussion / thought occurs, mistakes will be made.  If perfection could be obtained with enough thought, I might deliberate a lot more before acting.  Perfection won’t happen and I don’t believe a few percentage points of accuracy is worth tacking on extra time to every decision.  Making an incorrect choice can be corrected and being wrong isn’t something to fear.  Besides, I’ve learned a lot more from my mistakes than my successes.